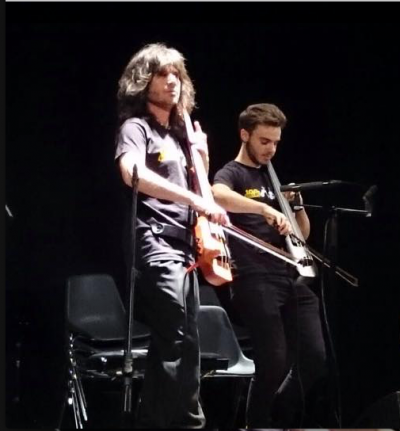 The band was formed within the walls of the house when the young Tiziano as gift asks his ﬁrst cello. In 2016 he obtained a diploma in cello with full marks and special mention at the Conservatory of Bologna. He has had already numerous concerts with chamber orchestras such as Orchestra Arkè, Cembal Orchestra and youth orchestras in which he also held The role of soloist and principal cellist performing in the Vivaldi’s Four Seasons  and Donizetti’s Don Pasquale in Germany. His repertoire includes the concertos for cello and orchestra by Dvorak, Haydn n.2 and Shostakovich n.1. Enrico, eclectic cellist and composer, from the many experiences and professional collaborations of high level in every area and genre. He was ﬁrst cello in several orchestras, has collaborated with Bobby McFerrin, Trilok Gurtu, Solisti Veneti, Michael Nyman , Zucchero and many others, from Luciano Pavarotti, Andrea Bocelli to Paolo Fresu, keeping with them concerts and recording around the world. Father and son cellists involved in duets ranging from Baroque to Jazz and Rock, including original compositions. The arrangements are all by themselves. The repertoire can be performed with acoustic instruments or ampliﬁed acoustic instruments both acoustic and electric. They have performed at festivals such as the Incontri Musicali Farnesiani (Pr), Via Julia Music Austria, Klagenfurth VolxHaus Austria, Note nel Bosco Andalo (Tn), Eco della Musica Bologna, Altotasso Music Bologna, Valpolicella Music San Giorgio Valpolicella, Calici di Stelle Rimini. In January 2016 they were invited by the Italian Institute of Culture in Beijing to perform in China.In 2015 they released their ﬁrst CD : GuerzonCellos