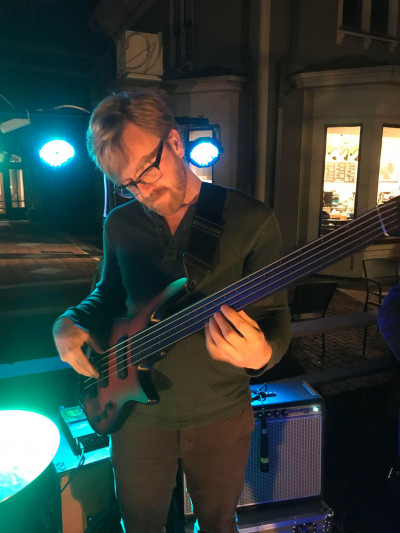 Ned and the team have really carved out something special here. I end up in many conversations with bassists after gigs wondering about the instruments. I did a show with Kaveh Rastigar (bassist with John Legend, Sia, Kneebody) and he was really in to the CR RADIUS.  It has been a sincere pleasure making music with these basses. The (CR5 RAIDUS fretless) is amazing. I used it on “Read Them Their Rights” (from the 2014 Jason Spooner Band album Chemical). Unbelievable, the sound I got from this. It was like a synth sine wave of death from space. Absolutely incredible. “The piezo just adds so much! There are classic elements of a p-bass, subtle upright tones, and the tight saturation of active pickups.  I run 50/50 Piezo/magnetic, with the magnetic switch at the neck pickup and the piezo switch centered. Highs are at about 30%, and lows are at 100%. When soloing, I kick both switches to “bright” (bridge pickup and wide open on the piezo) this gives me a brilliance and focus, while retaining the flute-like roundness of the flat wounds. It’s a beautiful sound.” Regarding the NXT5a RADIUS, I love the simplicity of that bass. These density and breadth of tone from these instruments (CR and NXT5a RADIUS Bass Guitars) is sending the sound of the music in a very cool direction. “Vader’s Sword” (NXT4a upright) has been a dream to play now that I have the endpin attachment.

Adam Frederick began pursuing music at age 5, starting on violin and moving to piano by age 7. It was at this piano teachers house that he first saw a double bass, and he was immediately in love. The curves of the old blonde Kay were so enticing to the would-be bassist that his teacher, after 2-years of failed attempts to redirect his gaze to the keyboard asked “Maybe you want to play bass?”

He was so enamored with the instrument, he decided that he would learn how to play the instrument before he ever got one in his hands so that when he did, he could easily convince his parents that this was the missing piece.

During a break in a jam session being held by his older brother, Adam ran to the attic to grab the bassists Fender to work out a basic walking blues pattern by ear. His months long obsession with the instrument had laid out the fingerings in his mind ahead of time, and it was only a matter of minutes before he was swinging away. Making it through a chorus, he ran down stairs to collect his mother to show her that this was a sound investment.

She was sold, and Adam was the proud owner of an off-brand, short scale bass. Two weeks later, Adam broke both his arms, and was stuck in casts up to his shoulder, bedridden, and dreaming of getting his hands back on the bass.

He home schooled for two years in middle school. Most of that time was spent playing along with records through an old Fender Bassman gifted by his uncle, and going to school for band, where he was working on saxophone.

By his junior year of high school, Adam was playing around New England in general business Bands with people twice his age, taking music courses at the University of Southern Maine School of Music and studying classical and jazz bass under Lynn Hannings of the Portland Symphony Orchestra and “Who’s Who of Jazz” bassist, Bronek Suchanek. Adam was also enjoying a vibrant singing career as well, having traveled to Europe, Carnegie Hall and the White House with the world champion Windham Chamber Singers, and studying opera under Maine voice guru David Goulet.

Adam had started teaching at a few local music schools, and was tutoring other USM students in theory and ear training.

After graduating, Adam attended USM for a year, and then moved to California where he took some lessons with session legend Max Bennett, and found himself supporting local hip-hop artists.

When Adam returned to Maine, he found himself quickly at the top-of -the -heap of young players. He continued study under Mr. Suchanek, took a lesson with Ben Street, and played constantly with every group he could, as well as writing and performing with his own groups, The Get Band and Frederick.

Adam left school around the time his twin girls were born, in order to help around the house and focus on music work. He was already playing 5-7 nights a week, so finishing his music degree seemed superfluous…there were only core classes left anyway.

Around this time, fellow bassist (now a rep for Sweetwater) Andy Rice, had Adam pick up some sub work with Jason Spooner, a local singer/songwriter who had recently released his debut album “Lost Houses”. Adam continued to sub with the band until Andy left to pursue a Masters Degree soon after the release of Spooner’s second album “The Flame you Follow”. Adam took over the bass chair full time in 2008. Adam finished his music degree at University of Maine Augusta in 2014.

Adam has spent the last 11 years playing close to 200 nights a year, producing, composing, teaching, recording and gigging. He has also started producing a series of lesson videos, which he hopes to develop over the next few years. With so many lesson videos that focus on “licks” and flashy playing, Adam hopes to instill a strong sense of purpose, patience and the importance of practice into his students. He believes the bass a position of power within an ensemble, and it needs to be taken very seriously, so as not to derail the music. A deep knowledge of theory, and keen discernment far exceed the need for speed in ones playing. “The more notes you play, the fewer gigs you have. This is not some pedantic fluffery, it comes from experience.” 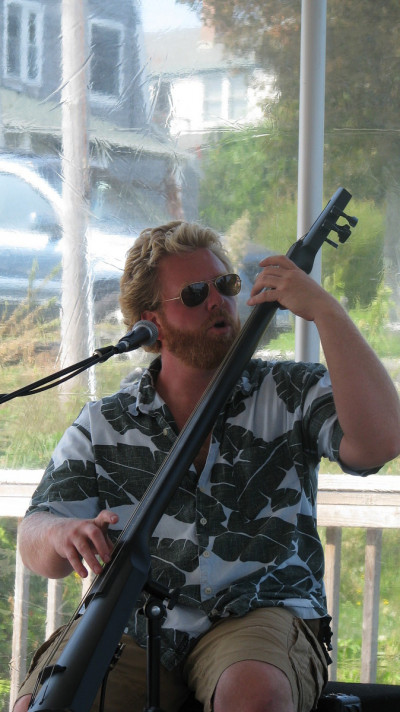 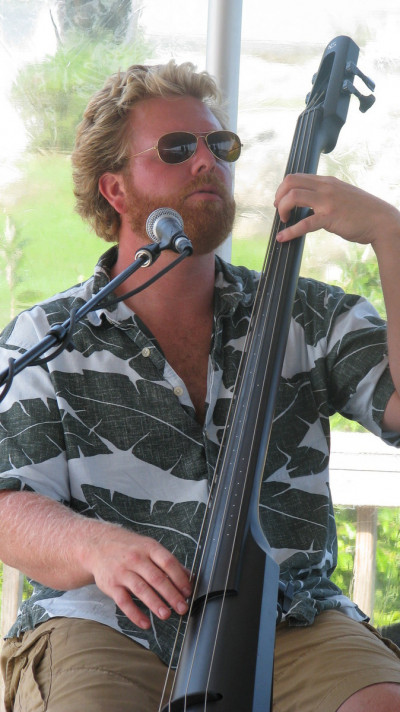 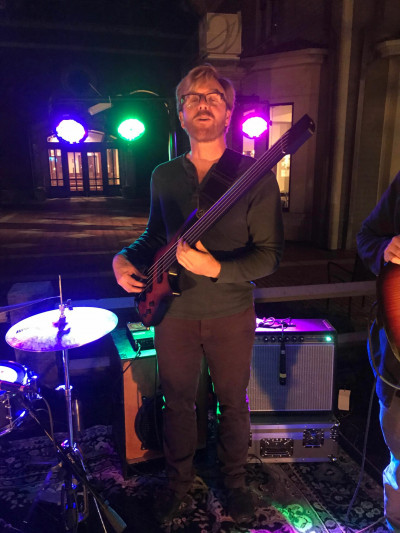 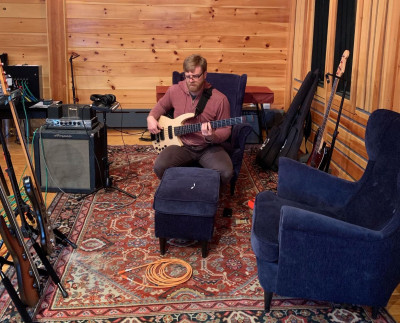 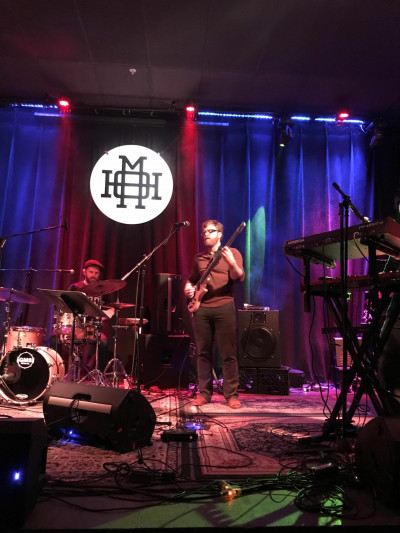 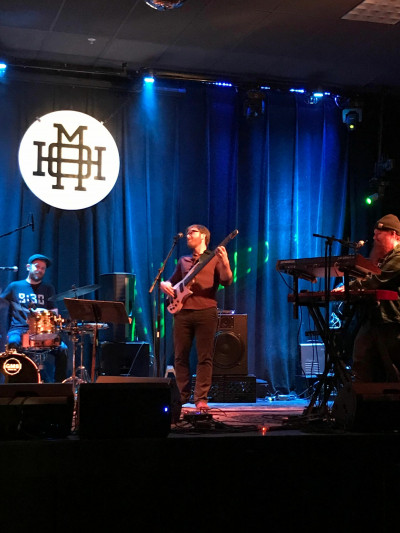 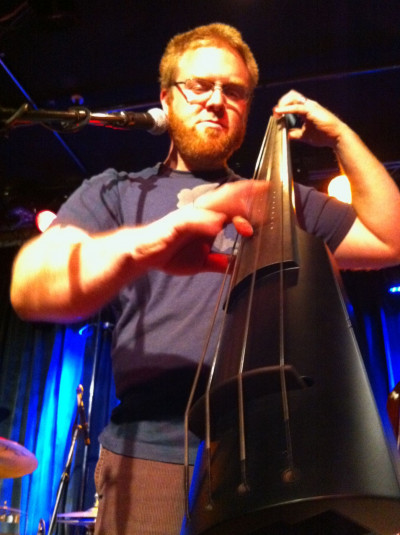