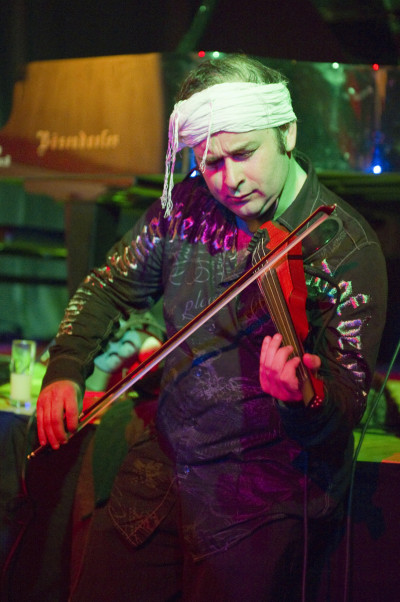 Aleksey Igudesman was born in Leningrad at a very young age. He is known as a violinist, composer, conductor, comedian, film maker, actor, writer, poet, and entrepreneur, but his secret passion is cooking, eating out in luxurious restaurants and writing reviews on tripadvisor. He has never won any competitions, mainly because he has never entered any. During his studies at the Yehudi Menuhin School, he read the entire plays of Shaw, Wilde and Chekhov, which didn’t improve his violin playing, but made him feel foolishly somewhat superior to other less intellectually endowed, yet harder practising, colleagues. After studying the violin with acclaimed pedagogue Boris Kuschnir in Vienna he embarked on a successful career playing concerts around the world, composing music for movies and humans. Aleksey Igudesman plays on a Santo Seraphin violin from the year 1717, which is kindly loaned to him by ERSTE BANK.

Igudesman writes a lot of music. He has known to start and finish works before breakfast. Which may be less impressive in light of the fact that he sometimes eats breakfast in the evening. His compositions are published by Universal Edition and have been performed worldwide by soloists, ensembles and orchestras, such as the New York Philharmonic and Vienna Symphony Orchestra, often with his participation as a solo violinist and conductor. Igudesman has written for and performed as a soloist on several movie soundtracks. He has worked particularly closely with Academy Award-winning film composer Hans Zimmer on numerous movies, including “Sherlock Holmes” which received an Oscar nomination for the Best Original Score. Igudesman‘s commissions in 2018 include a whole evening of music for the Zurich Tonhalle Orchestra, a piece for two violins and orchestra for Vadim Repin and Clara-Jumi Kang, and a work for violin solo and 100 violinists for Daniel Hope, as well as numerous publications on Universal Edition and Modern Works.

Apart from touring extensively around the world with Igudesman & Joo, he performs his solo show “Fasten Seat Belts”. Aleksey Igudesman has directed, produced and starred in the feature-length comedy/documentary “Noseland”, featuring, among others, Julian Rachlin, John Malkovich and Sir Roger Moore. Noseland has been premiered in 14 festivals around the world and won the “Most Entertaining Documentary” award at the Doc Miami International Film Festival. Igudesman created and tours in 2018/19 with “The Music Critic” – a sardonic mix of the most evil music critiques of the last centuries written about some of the greatest works of music. John Malkovich slips into the role of the evil critic who believes the music of Beethoven, Chopin, Prokofiev (and the likes) to be weary and dreary. 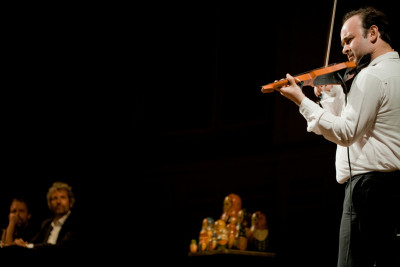