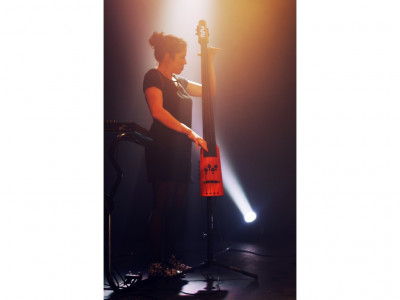 Anne-Colombe Martin holds down the low end with her NS CR4M Electric Upright Bass for electro-swing outfit Ginkgoa.  Led by Nicolle Rochelle and Antoine Chatenet, Ginkgoa combines refreshing  French infused Pop Music, the Swing of old New York with a mix of Electro French touch beats, they only have one thing in mind: to make generations of people dance, sway, and sing along to melodies that stay in your head long after GINKGOA has left the building and for as long as the Ginkgo, their tree totem, continues to survive.

Frequently described as a modern version of the electro-swing heavyweights ‘Caravan palace’ & ‘Parov Stelar’ due to their energetic live shows and ability to make any audience dance; critics and audiences everywhere agree that GINKGOA has rightfully earned their own place at the top of this list.