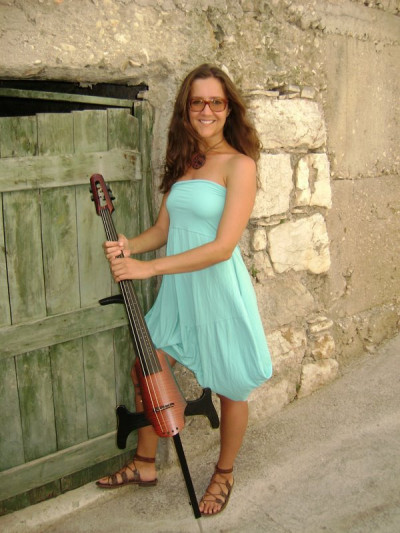 While in Los Angeles, Guthrie curates, produces, and performs in concerts of work by living composers. These concerts have included the 2006 North American premiere of French/Greek composer George Aperghis’ Sextuor: L’origine des espèces. Using texts from both Darwin and Gould, this chamber opera tells the story of evolution, with the cellist as the “theorist” in a speaking/playing role. She continued this on at the Darmstadt New Music Festival and worked directly with Mr. Aperghis on performance style for the chamber opera.

For over 10 years she has curated and performed concerts with Guthrie & Streb, a duet that has more than 50 composition written directly for them, and numerous residencies and concert series that promote experimentation within their classical string instruments. In 2010 she completed an artist’s residency (with violist Cassia Streb of Guthrie & Streb, filmmaker Madison Brookshire, and sound artist Michael Pisaro) at the Hammer Museum in Los Angeles, California. The residency resulted in a 70 minute film, Transparent Cities, with prerecorded and live music, and is a portrait of Los Angeles that studies the complex relationships between reality and recording, presence and absence, lived experience and re-presented time. Their most recent concerts focused on human’s use of counting in life, and was centered on Tom Johnson’s counting duets.

Prior to that residency Guthrie organized a retrospective concert of the work of American composer Earle Brown with friends and colleagues of the late Mr. Brown performing. This concert–in collaboration with The Earle Brown Foundation–included a publication with writings by Michael Pisaro, Christian Wolff, Joan LaBarbara, Erika Duke-Kirkpatrick, Dorothy Stone, Art Jarvinen and many others.

Her recent concerts and tours have taken her to Alaska, Australia, Canada, Serbia, Croatia, Slovenia, Macedonia, Germany, England, and to all corners of North America; performing and recording with FUN: Guster; Moira Smiley & VOCO; Spiritualized; Seawolf; The Grandmothers Reinvented (Zappa); and with guitarist Miroslav Tadic and actor Rade Serbedzija.

As a private cello teacher Guthrie enjoys teaching all ages with a focus on technique, traditional repertoire, composition, theory and creativity. She has taught, hand-doubled, and recorded for the film industry. This included teaching actress Deanne Bray for the television show Heroes, where she worked with composers Wendy Melvoin and Lisa Coleman (Wendy & Lisa). Her recent film work includes teaching, hand-doubling, composing, and recording for The Mourning Hour, as short independent film by Shevaun Kastl featuring Robert Knepper. In 2014 she taught and hand-doubled for Amy Acker on Agents of S.H.I.E.L.D.