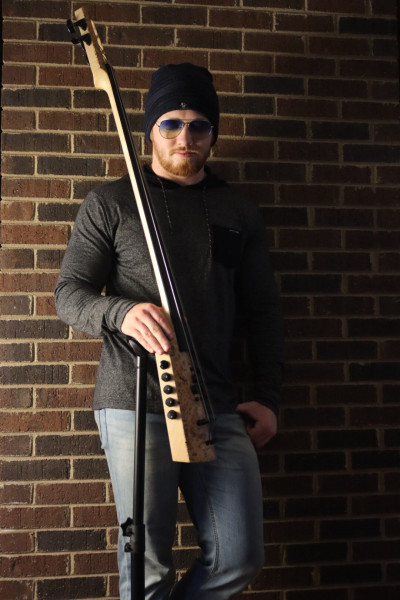 NXT5a RADIUS Bass Guitar – This is a super fun bass to play and it makes me want to pick it up more and more. I love using it to record in the studio because of the diversity in tone I can pull from it. It’s also been great for live performance and has a fun modern vibe. Omni Bass – The Omni has been my upright bass go to for several years. It offers a large but clean low end response that’s balanced with great mids and highs. I enjoy using a bow with it also to solo and to create ambience that brings songs to life.

Soulful and improvisational with moments that lure you in describe the Moore Brothers.  This prodigious group with its indie pop sound creates sharply-crafted beats and grooves that drive the audience to dance to the inventive blend of musicianship, creativity and modern vibes.

Their musical journey has taken them to perform at MusikFest, MerleFest, Eastern Illinois University, Mattie Kelly Arts Foundation, Musicians Against Childhood Cancer, Dollywood, Martin Guitar Showcase at CMA Fest, The NAMM Show, Nashville Guitar Fest, OBX Festival, Station Inn, Biltmore House, WOB Street Fest, Dorton Arena, ETSU Freedom Arena and many School shows on the east coast.  They have also opened for Charlie Daniels, played an event with Dale Earnhardt, Jr. They were featured in a Pam Tillis video and performed at a CMA awards night after party with Collin Ray and John Berry.  In March 2018, they were featured guest on – Home Grown Music on PBS.  In April 2019, The Moore Brothers were filmed as part of the NC Year of Music show to be released on PBS.

“The Moore Brothers are full of energy and entertainment. They aren’t just ‘another band’, these young men can really play, and are always a fan favorite anytime they take the stage!” Steve Johnson – Event Producer/Artist Relations Manager – Wilkesboro, NC

“They really shocked us at the midnight jam at MerleFest. We were asked to curate the jam there. People take a lifetime to reach this stage and these young men think they’re ready? Well, these two started melting my brother’s face! They shocked everyone, and stopped the show. They were so good that Martin Guitar actually built them a guitar. They’re going to be the next best thing. They have that genius quality to them.”Dan Fedoryka/MusikFest – Bethlehem, PA