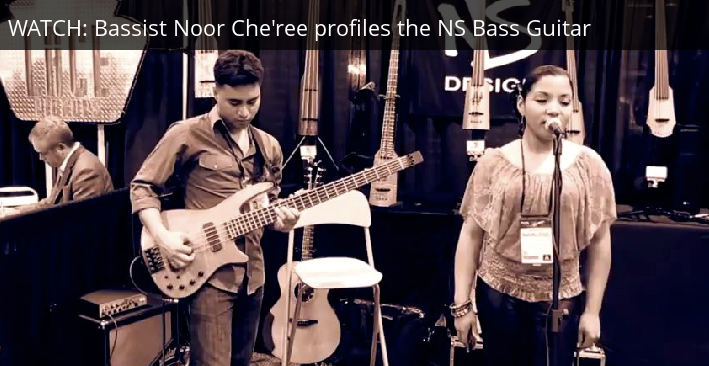 Bassist Noor Che’ree profiled the US5 Bass Guitar in an interview with luthier Jonathan Kelsey, who builds the instrument to Ned Steinberger’s design.

We were thrilled to host performances at the NS booth by former Juilliard classmates Charles Yang (CR4 Violin) and Michael Thurber (NXT Double Bass). The two play together in the music video project Collective Cadenza (CDZA).

It was also great to hear Chance Wilder Onody’s jaw-dropping performances on the CR4M Double Bass. He played solo and joined young California fiddler Avery Merritt on a blistering rendition of “Blackberry Blossom.”

Fabulous music like this provided the soundtrack for reunions with many old friends, including Tony Levin, Rob Wasserman, and Mark Egan. They were a welcome presence in the booth and an inspiration to many players and visitors.

It was also great to see many other NS Design artists, including:

(For more photos and videos of the show, be sure to visit our Facebook page and “Like” us for future updates!)

Thanks to everyone who attended for a terrific show! We’re looking forward to seeing some of you again (and many new faces) at the American String Teachers Association Conference in a few weeks. And we’re already excited for NAMM 2014!

We would like to extend a special thanks to the following people and companies for their outstanding support at NAMM: Dave Avenius of Aguilar Amplification, Stu Paterson of Mackie, John Krupa of RCF USA, Inc., Tom Spaulding of D’Addario, and NS Design Resident Artist Ed Howe. Thanks guys!