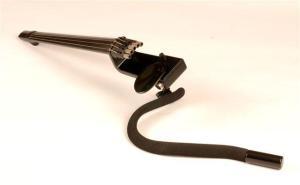 Back in the NS Design shop this month, after 12 years’ absence, was a very rare instrument. Known simply as “the black violin”, it’s a prototype that Ned built by hand shortly after leaving Steinberger Sound Company. He says that in many ways, it’s the culmination of the design ideas he began working on with bass guitars at the beginning of his career.

Ned built the black violin intending to put it into production; he approached Zeta Instruments with that idea. At the time, Zeta was still part of Gibson, which had purchased Steinberger Sound Company. However, Zeta decided not to manufacture the instrument, concerned that it would not gain a wide enough following.

“I understood then—and I understand even better now—that it’s not what people generally want in a violin,” Ned said. “It’s too radical.”

Technically and stylistically, the instrument is striking. Just as the Steinberger bass eliminated the headstock from the traditional bass guitar design, the black violin does away with the traditional violin’s pegbox and scroll.  The body, molded from carbon fiber, is barely wider than the fingerboard.  The forward end curves upwards at 90-degrees to form the bridge. All of the electronic components fit inside it, eliminating the belt pack that accompanied previous versions of the design. 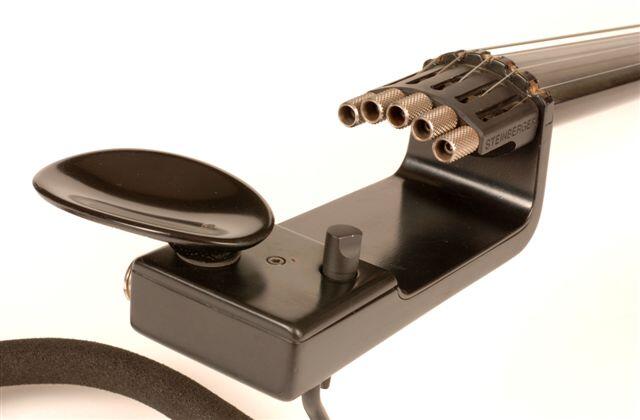 The bridge, made by Zeta, uses a separate crystal for each string, generating five separate outputs. An eight-pin midi interface supplements the standard 1/4″ output jack. Each of the five strings attaches to a combined tuning and clamping screw, the heads of which extend horizontally from the bottom of the tailpiece, perpendicular to the bridge. The system allows precise adjustment and low weight. It derives from the patented Steinberger tuner used on the guitars and basses—a visual clue that the black violin belongs to that earlier era of Steinberger instruments.

“All the radical thinking in the bass and the guitar was carried that much farther in the violin,” Ned said. “It represents the culmination of that development process.” 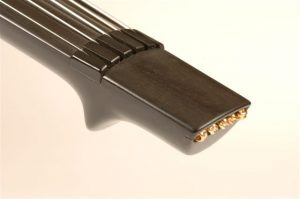 Early on, Ned showed the black violin to violinist Laurie Anderson, who has kept it in steady use until this year, when she sent it back to him for maintenance. Anderson requested that he install a balanced shoulder rest and remove the chin rest—a configuration she also uses on her five-string CR-series violin, which is her primary instrument.

Even though the black violin was never put into production, Ned is still proud of what he achieved with it.

“It’s lean and mean—something I really like.” he said Tuesday, shortly after sending the instrument back to Anderson in New York. “I put my heart and soul in to make it perfect from a design point of view. Wherever opportunities presented themselves, I pursued them. I took this sucker all the way.” 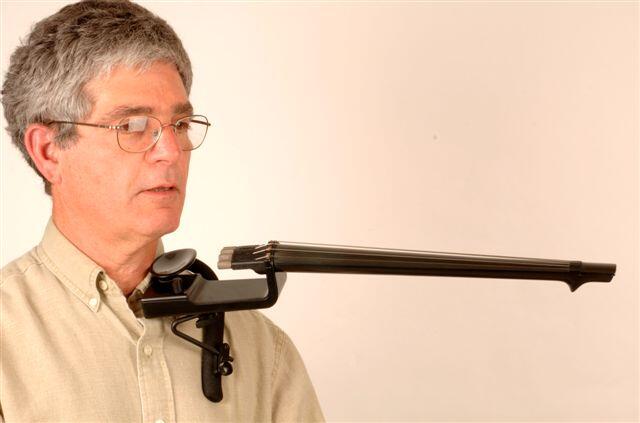