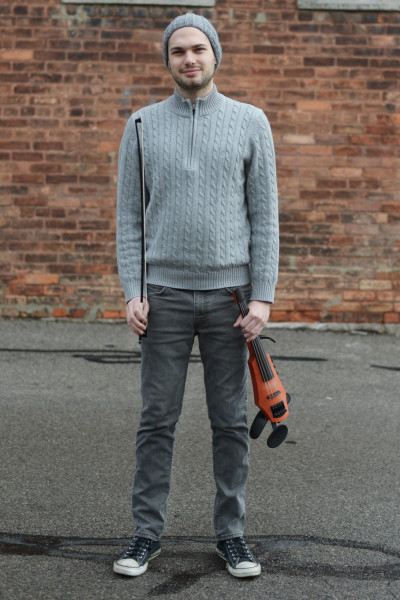 For years now, I had been in the market for an electric violin, and preferably one with five strings. One of my good friends has the NS CR-5, and after playing it, I absolutely had to get one for myself. The instrument is very versatile and allows me to fully reach the furthest depths of my musical imagination that I have been trying to experience for years. I highly recommend anyone who is in the market for an electric bowed instrument to go with NS!

Chase Potter started his music career just shy of five years old on the violin. It had a profound effect on him at an early age, facilitating his inherent musicality into something tangible. Just after a year of study, he began performing publicly, and it wasn’t long after when he began absorbing other instruments. The drums came first, then guitar; the saxophone family followed. He took on the bass in his teenage years, followed by the mandolin. While violin remained his sharpest tool, he showed an exceptional ability to assimilate any instrument he could get his hands on. As a high school student in West Jefferson, Ohio, Potter’s musical prowess would allow him to travel the world through the prestigious Columbus Youth Jazz Orchestra, touring across Peru with Wynton Marsalis sideman Wessell “Warmdaddy” Anderson. Subsequently, the culmination of his prodigal talent and professionalism beyond his years would lead to a distinction unlike any other: a full ride to the Berklee College of Music.

Potter migrated to Boston in 2011 and began a major in Violin Performance. It was during these collegiate years where he would earn some of his first major career accomplishments, including select performances with Grammy award-winning singer/songwriter Lalah Hathaway and critically acclaimed Scottish indie rock band Belle & Sebastian. Potter’s contributions were not restricted to any one genre and encompassed high calibur artists from all walks of the sonic spectrum, such as guitar phenom Julian Lage and mandolin virtuoso Mike Marshall. Needless to say, he completed his degree with distinction.

Upon relocating to New York City in 2016, Potter dove head first into the city’s vibrant music scene as a multi-instrumentalist. His musical opportunities were ample and distinguished—perhaps most notably as a featured violin soloist with Wynton Marsalis at the Lincoln Center—but New York proved prosperous in other ways. He found himself in front of the camera on several major occasions, performing violin on The Tonight Show with Machine Gun Kelly and Camila Cabello for their joint hit “Bad Things,” as well as a fictional guitar player on the season finale of HBO’s The Deuce. In 2020, he also performed with actress and singer-songwriter Sofia Carson of Disney Channel fame.

In tandem with his sterling resume as a sideman, Potter has created original music for the majority of his music career. Performing as a solo act or with a full band on occasion, his original music encompasses a progressive musicality within accessible songs that resonate with fans of power pop, indie rock and experimental music. His latest album, the apocalyptic Hitchhike To Oblivion, examines the turpitude of our society, employing a nostalgic songwriting palette found in the rich Americana of artists like Harry Nilsson, John Lennon and Randy Newman. Additionally, he contributed in the writing and production of Chameleon Culture’s debut album The Universe Is A New Year’s Day Parade on violin, guitar and vocals, as well as contributing to projects from Cale Hawkins, Louis Futon, Duckwrth, Granny 4 Barrel, Sammy Rae & The Friends, Aubrey Haddard, Miss Grit, Russell Jamie Johnson, Caleb Hawley and Brasstracks.

Chase Potter’s mission has always remained simple and steadfast: be true and vigilant through the power of music.