History in the making once again. I received my new tools from an innovator that I once had the pleasure of working with. Ned Steinberger master designer of the legendary Steinberger bass has reinvented the concept of electrical musical instruments once again. In 1985 I was blessed by God and honored to be one of the bass guitarist at the time to experiment with the Steinberger bass which I proudly toured the world with Ornette COLEMAN AND WITH MY BAND JAMAAL. I did extensive recording projects and premiered my four string Steinberger bass on the cover of my debut recording album “ShowStopper” on Gramavision Records. It definitely took the industry by surprise and propelled the bass community into a frenzy. The bass was everything good and everything that changed the current state of what a bass guitar was and where technology was heading. I am grateful first to God and to Chip Stern and Hap Kuffner for the introduction. When I did my first debut performance in New York with my band performing the music of ShowStopper I performed at The famed PUBLIC THEATER. After the concert I held a party there and many of the New York musical and art came to extend their well wishes on my concert. Ornette Coleman came backstage to congratulate me and that was a real blessing as I knew then that I was on my way and that I had become a disciple and and graduated student of the music that we proudly played. But what struck me was the entrance backstage of Ned Steinberger who was in tears and awe of seeing his bass guitar played and taken through its paces the way that I did it. We have remained friends for many years and always a warm feeling when I see him. I am blown away by these new instruments from NS DESIGN / The NS-WAV4 Radius bass guitar and my new friend NS WAV Upright Bass. It’s a new era and God willing I pray that I’m able to create musical excellence with these new tools of my trade. I hope to “ROCK EM RIGHT” Lets GO.

NS Artist Jamaaladeen Tacuma speaks with Premier Guitar about his recording with The Last Poets 2019 release Transcending Toxic Times and his Steinberger and NS Basses.

Few musicians leave their audiences with a feeling that they have truly witnessed something amazing. Artist/Producer/Performer/Arranger/Innovator AND Bassist – JAMAALADEEN TACUMA does just that. This native Philadelphian has always stretched the old mold of what and how a bassist is supposed to play. Tacuma has simply re-defined his instrument’s artistic potential.In the mid 70’s, his creatively free approach to the bass caught the eye and ear of the legendary saxophonist Ornette Coleman. Tacuma became a member of Coleman’s electric band, Prime Time, he toured with the group and played on some of Coleman’s historic recordings such as: “Dancing In Your Head”, “Body Meta”, and “Of Human Feelings”. As a soloist, Tacuma continued to press the musical envelope with his debut album in 1983 entitled simply, “Showstopper”. Several records followed, some of which include: Renaissance Man (1984), Music World (1987) and JukeBox (1989), Cosmetic, Boss of The Bass, which confirmed his ability to flip between various musical genres. Even the critics have had high praise for Tacuma’s musicianship and artistry. One year he received the highest number of votes ever for an electric bassist in the “Talent Deserving Wider Recognition” category of the Down Beat critics’ poll.

Tacuma has performed and recorded and collaborated with musicians on nearly every continent such as Japan, Korea, Europe and the Middle East. In September 2007, Jamaaladeen released a new recording entitled “THE FLAVORS OF THELONIOUS MONK RELOADED” paying musical homage to the great pianist composer Thelonious Monk and also releasing a new recording in October 2007 with “FREE FORM FUNKY FREQS” a trio with guitarist Vernon Reid (Living Color),and G. Calvin Weston (John Laurie, Medeski, Martin & Wood) on drums entitled “URBAN MYTHOLOGY” on Thirsty Ear Records. He has also played and produced for many American and European Jazz/Funk musicians. Furthermore, the release “Mirakles” by Derrick Bailey, G. Calvin Weston & Tacuma was cited as one of the “most important recordings of year 2000” by All Music Guide. He also recently completed a recording entitled “DUST” with BAUHAUS member Peter Murphy on the Metropolis label. He is also featured as writer and co-producer on the new 2006 release of the World Saxophone Quartet’s album on Justin Time Records entitled “Political Blues” with a song by Jamaaladeen entitled “BLUE DIAMOND” Tacuma has collaborated with a diverse and talented roster of artists: Guitarists Jeff Beck, Carlos Santana, Marc Ribot, James Blood Ulmer, Jean Paul Bourelly and Derek Bailey.

He has performed and recorded with saxophonist Pharoah Sanders, Grover Washington Jr., David Murray, Odean Pope ,Wolfgang Puschnig and James Carter. He has worked with orchestras led by Anthony Davis at Carnegie Hall, to recording and performing with the Hip Hop rap group, The Roots, DJ King Britt and DJ Logic. Tacuma has shared the stage with the great comedian and philanthropist Bill Cosby at the JVC Jazz Festival, on the David Letterman show where Tacuma was Band Director for the night. He has even written music for the hit TV show, “The Cosby Show”. He has worked with poets Jayne Cortez, Quincy Troupe, Amiri Baraka and co-wrote and co-produced a song entitled “WOMEN FIRST” with the R&B Neo Soul group from Philadelphia, KINDRED (the family soul) on their new CD recording “IN THIS LIFE TOGETHER”, on the Hidden Beach/Motown label (2006). Jamaaladeen has recently explored the music of legendary saxophonist, composer John Coltrane with a preview recording and an extended European tour which featured the British saxophonist and BBC award recipient Tony Kofi. Jamaaladeen’s FOR THE LOVE OR ORNETTE released 2010 on his own label was a monumental recording made in honor of his mentor Ornette Coleman. In 2013 Jamaaladeen released Bon Vivant his 2nd studio recording with FREE FORM FUNKY FREQS trio with G. Calvin Weston and Guitarist Vernon Reid on his newly formed recording label Jam All Productions.

In recent years Jamaaladeen has been gaining recognition from some of the Unites States most prestigious artist foundations, 2011 Jamaaladeen received the Pew Arts & Heritage Award, The Marcus Garvey Foundation Award, Uptown Theater Hall of Fame Award 2014. Jamaaladeen has received composer’s residencies at the prestigious MacDowell Colony , Headlands Center for the Arts, and Civitella Rainier Italy, where he composed a new project he will be presenting in 2015. Staying true to his artistic and experimental approach to music, Tacuma is consistently bringing musical happiness to fans World Wide. 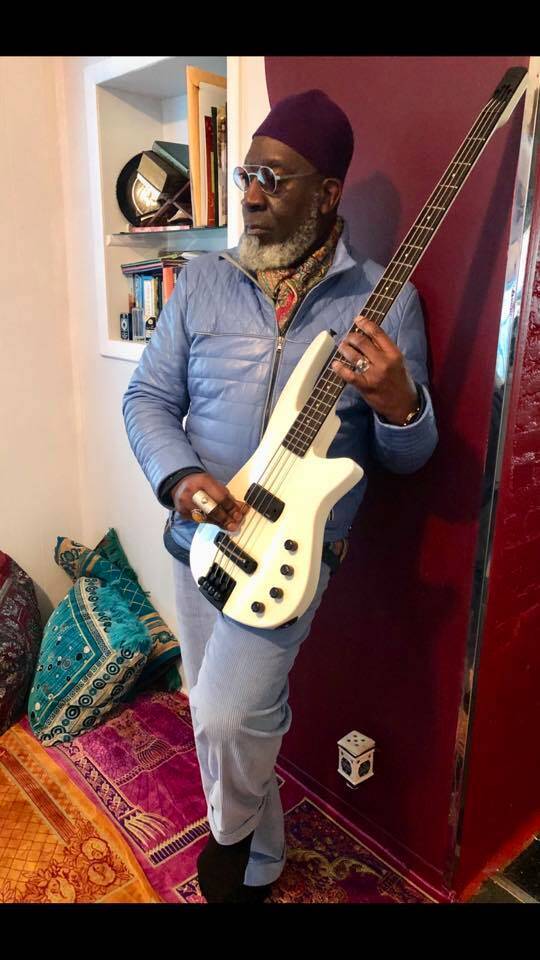 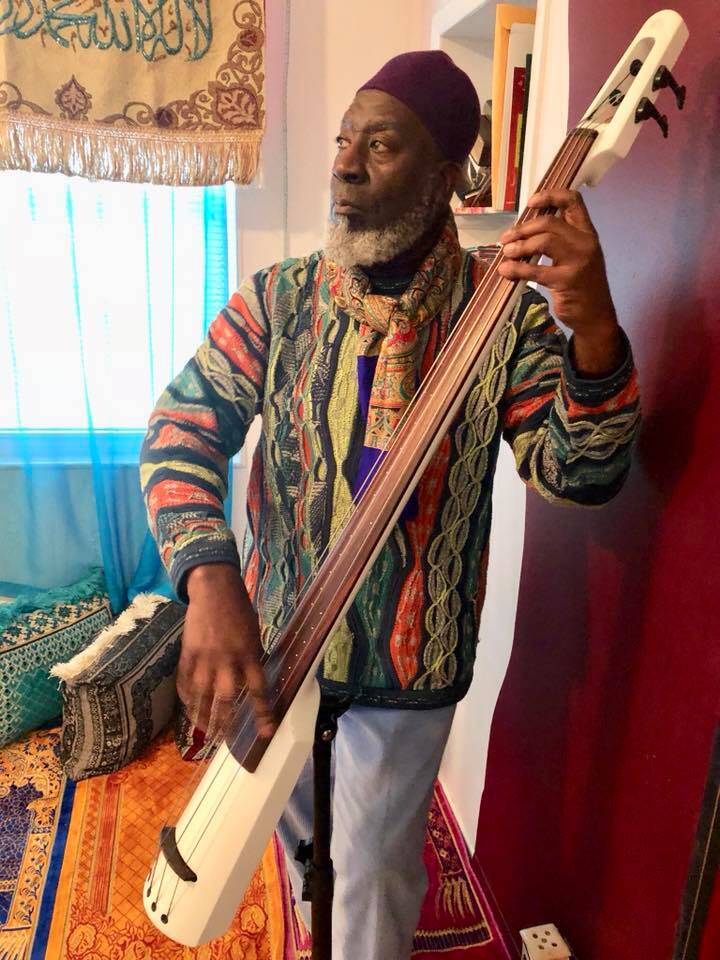