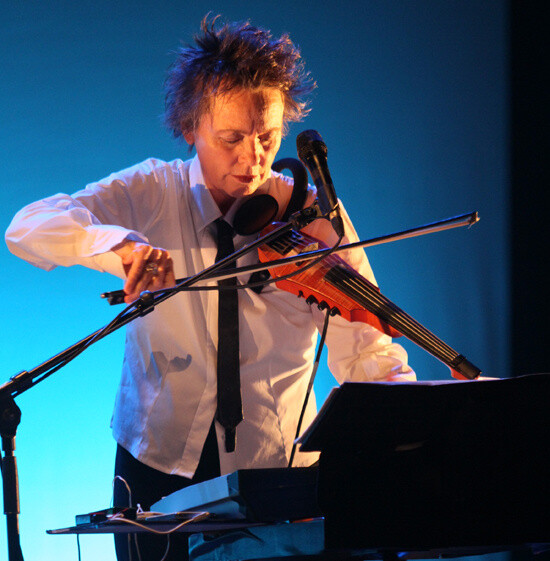 NS Design Artist and Electric Violinist Laurie Anderson has carved one of the most varied and storied careers as a truly unique, disparate and creative artists of the late 20th Century and recently receiving the acclaim and notoriety only a visionary as herself could receive, with her first Grammy Award in 2019 and performing as Resident Artistic Director at the SFJAZZ Center in 2020.   The Chicago suburban born Laura Phillips began violin at age five and at 72 years old is still searching and pushing the boundaries with her avante-garde multimedia performances charged with pioneering electronics and eccentric improvisations.

Laurie Anderson – Resident Artistic Director at SFJAZZ Center in 2020 has made landmarked performances with cellist Rubin Kodheli and famed-bassist Christian McBride.
The concert is part of The L.A. Philharmonic’s annual jazz series.

Laurie Anderson Lands Year-Long New York City Residency – Rolling Stone
Laurie Anderson will spend most of 2020 performing a Sunday music series starting February 3rd at Joe’s Pub in NYC as part of their 2020 Vanguard Award and Residency.  “The Public is a nonprofit theater that presents plays and musical performances almost every night of the year, and aims to support New York artists by encouraging exchange across generations and mediums.” – New York Times – Giovanni Russonello

Her 2019 release of “Songs from the Bardo,” based on settings of the Tibetan Book of the Dead has garnered rave reviews in Rolling Stone and Pitchfork magazine.

First performed in 2015, this evening with Laurie Anderson and Philip Glass is a unique musical collaboration. Laurie is one of America’s most renowned – and daring – creative pioneers. She is best known for her multimedia presentations and musical recordings.