Bass player Amos Heller has played just about every kind of music you can think of—from classical music to Zappa-esque rock, with some worship music and combo jazz in between. Since moving to Nashville in 2005, he’s been backing up a number of big acts, but his biggest gig yet was playing the 2009 Grammy Awards ceremony with young country singers Taylor Swift and Milley Cyrus. He wrote us recently to say that his NS Bass played well among the stars:

So there I was at the Grammys.

Man, is that a totally “check me out” way to start a story. Like I’m trying to be all super-casual about the coolest place I’ve ever played bass. Like I didn’t just watch Sir Paul McCartney walk by me, didn’t listen to Stevie Wonder soundcheck, and didn’t play in a room in front of everyone I’ve ever heard of. But it’s part of the story, so go with it, if you can.

So there I was at the Grammys. I had a lovely time backing up Miss Taylor Swift (my lovely and talented boss) and miss Miley Cyrus playing a stripped-down, laid-back version of Taylor’s song “Fifteen.” It’s an award show, and for those of you that have never played one, it means a LOT of acts are playing, and the fact that it’s live TV means that you have to hustle on, do your thing, and hustle off. Our hustling-on was held up by Snoop Dogg. Man, that dude walks slow and his bodyguard is massive. 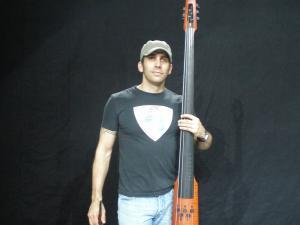 We get through our song, and it went off without a hitch, and now it’s time for us to hustle off. As I’m unplugging, and trying not to brain anyone with my bass or tripod, someone pokes me in the arm.

I have just enough time to put together the large frame, razor-sharp fedora, glasses and impeccable suit to realize that I’d just been playing bass three feet from Jimmy Jam.

Jimmy Jam. One of the most prolific producers ever. Part of the Time. That’s as in “Morris Day and The.” And in that instant- before we have to clear the floor when I realize who this is and how long I’ve been listening to songs that he’s made- he says just one thing:

Be sure to catch Amos as he backs up Taylor Swift on tour this summer.