NS Design congratulates cellist David Darling on receiving a Grammy nomination for “Best New Age Album” for his album “Prayer for Compassion”.  The nomination takes its place atop a list of many honors David has already received in his career.  “Prayer for Compassion” was named CD of the Month by Echoes Radio and features David’s NS Cello, among other instruments.  You can read more about it at www.daviddarling.com.

Click on the image below to read the full announcement. 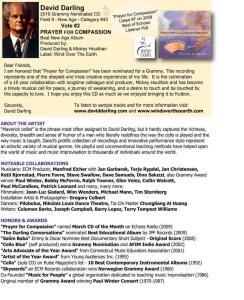