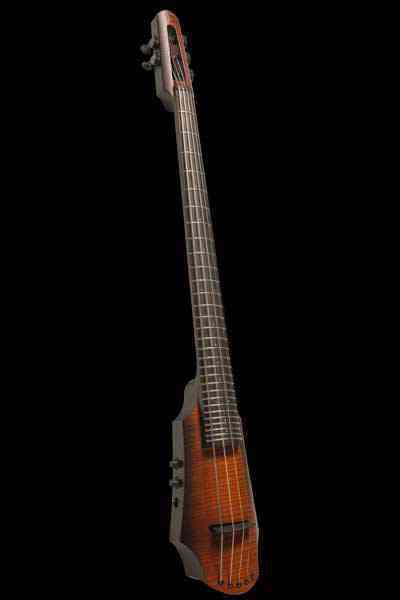 The new NS NXT fretted cello, designed by Ned Steinberger, blends the character and advantages of the guitar with the power and performance of the standard NS NXT cello. Available in 4 or 5 string configurations, either Black or Sunburst, and made in the Czech Republic, these sophisticated new instruments are beautifully crafted, yet surprisingly affordable.

Even the most traditional cellist will find that frets offer certain advantages, as well as new performance and textural possibilities. The most obvious of these is that, particularly when playing pizzicato, frets provide “open string” sustain for every note. The fretted cellist can more fully exploit techniques such as tapping, hammer-ons, and “stepped” glissando. Frets also guarantee accuracy of pitch in high volume performance situations where there may be less-than-optimal individual monitor setups.

The tone quality and dynamic range of the NS NXT cello owes much to the self-powered NS Polar(TM) Pickup System. Employing special piezo crystals, mounted beneath the bridge, the pickup captures the full sound spectrum created by the strings and body of the instrument. Arco versus pizzicato playing creates more vibration energy in one direction than the other, and a convenient switch on the side of the NXT actually allows the player to select sensitivity for either mode. The result is either more percussive response, or smoother and sustained response, adding a new dimension to what the player can create musically.

As a pure electric instrument, the NS cello has certain built-in advantages over an acoustic. One is the virtual absence of wolf tones, an unfortunate fact of life for the acoustic cellist. Another is freedom from feedback in amplified performance settings, which means that the cellist can move about the stage at will, and better yet, can take solos at any volume. Since 100% of the sound comes via the pickup, using looping and other electronic effects in live performance is much easier and far more effective than with an amplified acoustic, where much of the unprocessed sound “leaks” out to the audience.

Equipped initially with D’Addario NS Electric strings, NS cellos can be strung with any conventional cello strings. The 5-string version can be set up with either a high E or low F string. Since the electronics of the instrument are designed to deliver a powerful signal throughout the entire frequency range, the output is limited only by the range and quality of the amplifier or sound system.

NS cellos are designed around a 4/4 cello string scale. The NXT weighs just over 4 pounds, and comes with a padded gig bag and tripod stand. Other support options include the Frame Strap System which lets the player stand and move around with freedom, and the NS End Pin Stand for a more conventional seated playing experience. An escutcheon pin on the neck, corresponding to the location of the heel on an acoustic cello, is standard; a more conventional wooden neck heel is also available for installation. The bridge can be readily adjusted for higher or lower action, tailored to the preferences and style of the player. The NS cello also features a truss rod, which permits adjustment of the neck relief – useful under changing humidity conditions.